With live music and live events on hold for the moment, what better time to expand our musical horizons! We’ve put together a selection of some of the most compelling music documentaries to keep you entertained whilst at home. Covering fascinating stories about the lives and careers of artists from an eclectic range of genres including rock, afro-beat, soul and hip-hop, there is something for everyone. Take your pick and enjoy. 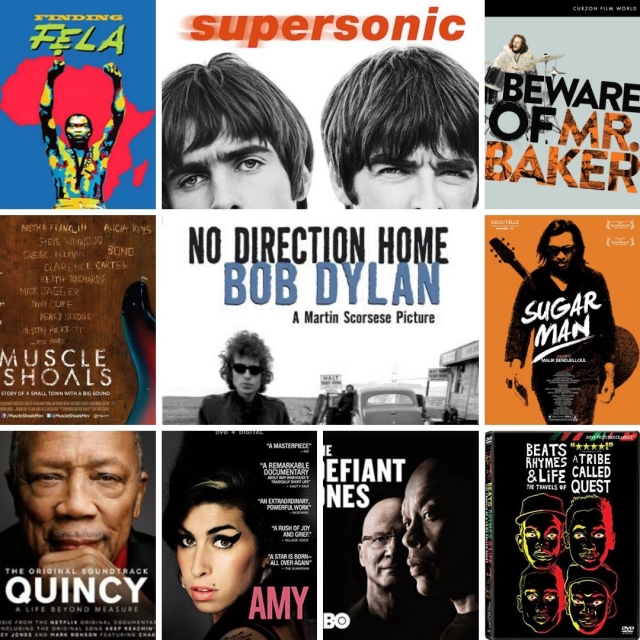 An essential for Soul music fans, Muscle Shoals is a tribute to Rick Hall and an Alabama city that holds an iconic place in music history. Hall was the founder of FAME studios in Muscle Shoals, which was the unlikely breeding ground for some of America’s most creative and defiant music by artists including Etta James, Aretha Franklin, The Staple Singers and even The Rolling Stones. The documentary is a personal favourite of ours as it’s incredibly random how a small town in Alabama became one of the hottest places on earth to record music. It features some of our favourite tracks of all time and Rick Hall’s life story is a fascinating rollercoaster.

Beware of Mr. Baker looks back at the musical career of one of the greatest and most controversial drummers of all time, Ginger Baker: a member of Cream & the world’s first supergroup; Blind Faith. The film includes his introduction to Fela Kuti; his self-destructive nature and losses of fortune; and his life inside a protected South African compound. This is another of our top three picks; there really are not many characters like Ginger Baker. His life is an incredible journey with his conflictive nature leading him to be on the move for the majority of his life.

Searching for Sugarman is a fascinating story of two fans’ search to track down what really happened to their hero, the lost folk singer Rodriguez, who was long rumoured to be dead. Their search materialises into an extraordinary tale of the artist once pipped to be the new Bob Dylan, and tracks his iconic status in South Africa after a short lived career in America. This completes our top three; it’s a breath of fresh air to learn about a lesser known star who there aren’t many other documentaries about. The contrasts in the reception to his music between cultures are striking, and the fact that a star like him can disappear into thin air makes for a truly unbelievable story.

Supersonic is a revealing portrait of the meteoric rise of Oasis and the ingenuity and chaos that brothers Noel and Liam brought to the band. With unseen concert footage and candid interviews, this film shines light on one of the most generation defining British bands that has ever existed.

Watch on Netflix and Prime Video

Quincy is an intimate film about the life and career of singer and producer Quincy Jones, a music industry icon and winner of 27 Grammys. The film reflects on how Jones transcended racial & cultural barriers, mentoring the careers of young talents such as Will Smith, Oprah Winfrey & Michael Jackson, and cementing his iconic status in music and popular culture.

Finding Fela is a documentary that portrays and analyses the life and music of the legendary Nigerian Afrobeat pioneer, Fela Kuti. It traces his creation of a new musical movement, which was used to express his revolutionary political views.

The Defiant Ones is an incredible four part documentary series which examines the unbreakable friendship between music legends Jimmy Iovine and Dr. Dre, which helped transform contemporary culture. It tracks their tough beginnings, the moment their paths crossed and the story of one of the biggest deals in music history that emerged as a result.

Amy is an intimate portrayal of the life, career and death of the immensely talented Amy Winehouse. Directed by award-winning director Asif Kapadia, the film features rare archived home videos and personal testimonials, and reveals her heartbreaking battle with celebrity, fame and addiction.

BEATS, RHYMES & LIFE: THE TRAVELS OF A TRIBE CALLED QUEST

This documentary tells the story of one of the most influential hip-hop groups of all time, A Tribe Called Quest, tracking their career in the 1990s from start to finish. Alongside the musical focus, it delves into the tensions and clashes that occurred between Phife Dawf, Q-Tip and Ali Shaheed Muhammad, and their eventual breakup. A must watch for any fan of the iconic rap group.

Directed by Oscar winner Martin Scorcese, No Direction Home focuses on the career of singer-songwriter Bob Dylan specifically between 1961 and 1966, and his immense impact on American culture and music. With unseen footage and revealing interviews, the film shows Dylan’s rise to folk fame but also the controversies during his tumultuous years.

Available to purchase on Amazon.co.uk