Have yourself an experiential Christmas

The seasonal holidays are the most exciting and active periods of time for brand activations, and 2021 is no different. Being one of the biggest holidays in the Western world, Christmas attracts an increased rate of sales for retailers and brands as they capitalise on the festivities and super-sized shopping habits.

This year, Experience Account Manager, Kotryna, has been looking at the overarching themes that lie within these brand activations, and pins down the top three trends she’s been noticing across the events.

Have yourself an experiential Christmas 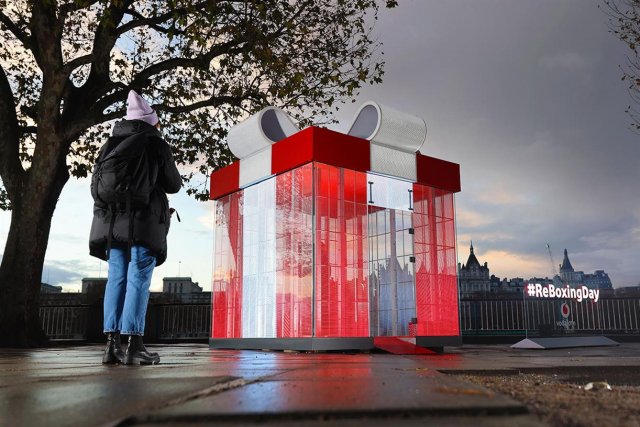 Capitalising on product sales might be especially hard this year, as in the world post-COP26 and per the survey conducted by the IPA, it has been revealed that for Christmas 2021, 56% of 18-24-year-olds are considering more sustainable shopping habits. Shoppers are increasingly choosing locally sourced products, upcycling or buying refurbished items when sourcing gifts for others. With this in mind, brands need to consider changing their messaging to fit with the shifting sentiment.

Several brands have done exactly that, by tackling the challenge and using their brand presence to call for positive change, all whilst designing activations with a social purpose in mind. 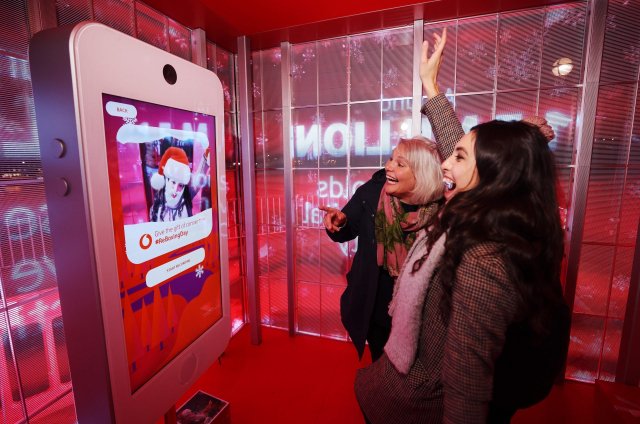 Shining a light on the true meaning of Boxing Day – traditionally the day of giving back – is Vodafone. Their activation ReBoxing Day activated London’s South Bank at the beginning of December with a giant LED illuminated gift box that displayed the brand’s “Give the gift of connection” campaign messaging to passersby.

Londoners were encouraged to recycle their old digital devices and donate them to people living in digital poverty with an aim to close the gap of digital exclusion. The activation runs in line with their long term pledge to power the connection of 1 million people that are currently living without digital connection by the end of the year 2022. To support or read more about this inspiring initiative, you can find it on Vodafone’s website. 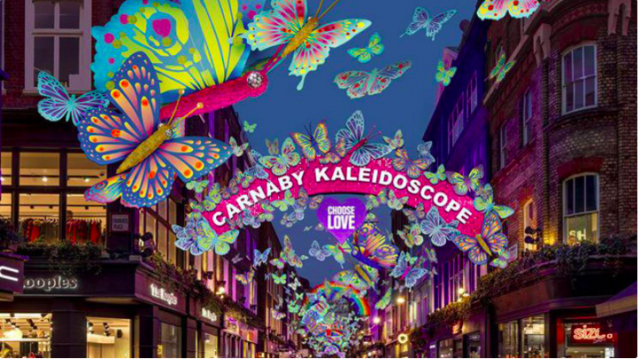 Choose Love is a refugee charity that annually opens a pop-up store in Central London, but for the second year in a row it also takes over the Christmas Lights installation of the busy Carnaby Street in London, all with the aim to raise awareness of the refugee crisis. The aim of the campaign is to steer positive change and help raise funds for refugees around the world.

Last year the Carnaby Street lights were available to view via a virtual 360º tour due to the imposed restrictions, whereas this year Londoners are actively invited to not only visit the Shop for Refugees store but also to experience the shimmering kaleidoscope installations that represent transformation, change and hope.

Over in Glasgow, the city that hosted this year’s COP26 (as well as pledging towards a low emission zone plan and setting to be car-free by 2027) energy provider EDF activated the city centre with the first Christmas Tree-V with pollutant-reactive changing festive lights. The technology behind the installation has been specifically designed by the internal EDF research and development team and allows the passers-by to see changing lights depending on the pollutant levels in the air.

The festive lights will turn from green to white if the live pollutant data exceeds the annual average limit of air pollutants set by the World Health Organisation (WHO), indicating the high levels of air pollution and encouraging citizens to consider other means of transport that have less impact on the carbon emission around them.

This activation follows EDF’s earlier in the year conducted consumer survey, which revealed that many Brits (58%) still choose petrol or diesel-fueled cars when travelling around this Christmas.

This term surged in popularity in 2019, and is still here to stay. Creating ‘Instagrammable moments’ is still a big driver for consumers when choosing which activations to attend – all for that attractive and aesthetic shot for social sharing. There’s no denying that with the popularity of video-based platforms such as TikTok, brands currently also need to consider their spaces to be video-worthy, when designing their activations, as in recent years social media users and influencers shifted from still to moving image format content. The festive season, when the city air is filled with the smell of mulled wine and filled with festive lights, is the perfect time for brands to embrace the consumer desire for Insta-worthy life experiences. Here are some of our picks of brands that are doing exactly that.

#1 Malibu: Have a very Malibu Christmas 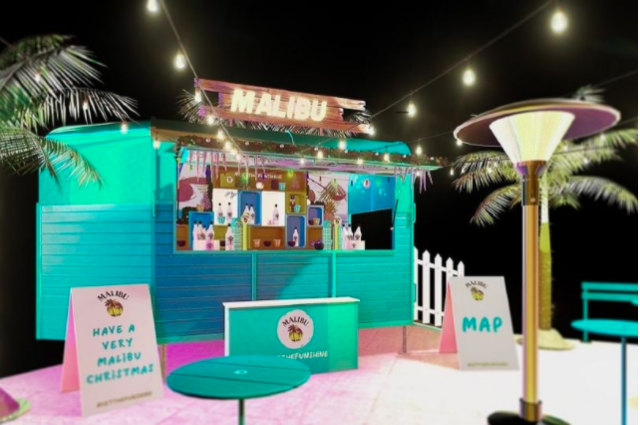 For a drinks brand that has a strong summer feeling attached to it, Malibu invites its audience to experience the Christmas season with a Caribbean twist in a winter-style pop-up, happening in Cardiff and Liverpool throughout December. The pop-up will feature a giant booth that allows visitors to step into an interactive advent calendar, and choose a box of their choice to find out if they have been in the ‘Nice or Naughty’ Malibu list.

The pop-up will offer a chance to win prizes, purchase a limited winter merchandise. The festive pop-up bar painted in iconic turquoise colour will also invite visitors to  try some delicious rum-based cocktails, upgraded specially for winter season, like a Malibu Snowjito or Malibu Hot Chocolate. The interactive pop-up is designed to ignite the fun side of its guests as parts of its “Let the Funshine” campaign which was launched back in Summer 2021 to promote the fun side of life and enjoy the little things no matter what. 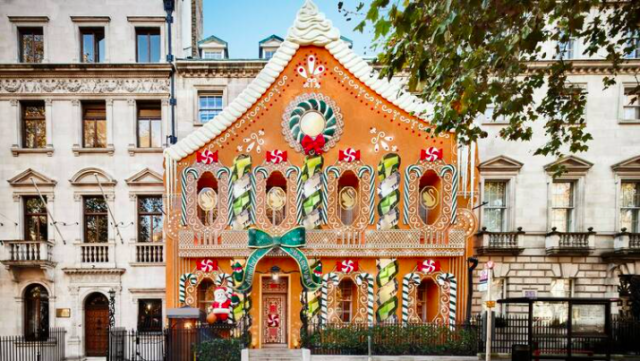 Annabel’s is probably one of the most iconic London’s private members’ clubs and over the years it has created some of the most fascinating facades in the city. Previously, the exterior of Annabel’s Mayfair has been transformed into a live rainforest, dedicated to create a vertical meadow of flowers, and built as a tribute to Nutcracker.

This year, however, the club came back with another triumphant design – partnering up with the creative team at Swarovski and transforming the club’s exterior into a gingerbread house. The festive biscuit wall, although sadly not edible, is covered not only with 6-ft-tall fiberglass candy canes and icing imitations, but also shimmers with dust from Swarovski crystals, which are made of no longer used leftover crystals, brought out for one last opportunity to shine. The spectacle on the Berkeley Square draws attention from afar and definitely makes a great background for those wanting to capture the Christmas spirit in London Mayfair streets. 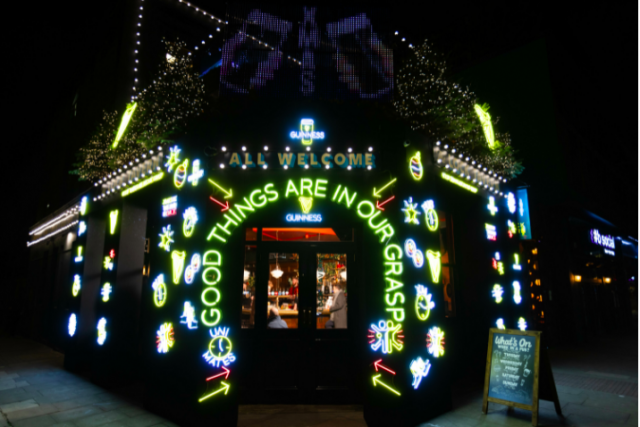 During the last couple of years of the pandemic, Guinness has played a huge role in supporting the hospitality industry, especially Britain’s pub scene, which has been hard hit by the pandemic. Rolling out the ‘Raising the Bar’ programme, the brand has financially contributed and supported over 30,000 pubs’ across the country. Regardless of pubs being open once again, Guinness is continuing to actively show their cooperation to the local pubs and surrounding communities.

This Christmas the brand has selected around twenty pubs across the UK and decorated them with some quirky Christmas neon lights in order to attract consumers and boost sales. The aim behind the ‘Light Up the Local’ campaign and the festive makeover is to recognise the importance pubs’ play in bringing local communities together and acting as community hubs.

Trend 3: Tie it with digital

Even on the other side of the pandemic, here at Marble our live experiences have a hybrid or at least marginally digital edge. Digital activations allow us to learn quickly about what our audiences like, and gathers their data to optimise future campaigns. Here are some excellent examples of brands doing just that.

Encouraging families to unleash their creative side this year, LEGO® has built a ‘Carousel of Creativity’ – a hybrid Carousel installation in the middle of Covent Garden in London, which features 5 large-scale characters built out of LEGO® bricks, that challenge the norm and celebrate limitless imagination. The activation also features an area with digital screens that showcase children versions of their holiday LEGO® rebuilds submitted on the LEGO Life app.

Being a global brand, LEGO® has also managed to reach out to a wider audience outside of London, or even the UK, and for those unable to attend in person, have offered a virtual solution to get involved. By visiting the Lego.com website, online visitors can find a 3D model of the carousel that can be explored online through an interactive 3D tour. The digital version also offers weekly themed building challenges to activate the younger audience week after week. 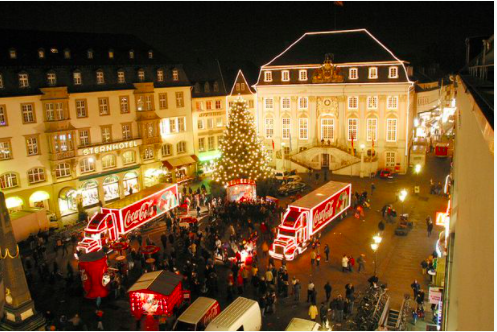 The iconic Coca-Cola Christmas truck, that we missed last year due to the national lockdown, is back and hitting the UK roads again this festive season. The Coke lorry is visiting as many of the UK cities as possible, already stopping at Glasgow, Leeds, Yorkshire, to name a few. Each pit stop will be transformed into a snowy wonderland setting as the truck parks for visitors to take a photo next to the iconic truck, as well as enjoy a small can of Coca-Cola Zero Sugar.

Following last year’s restrictions, Coca-Cola (Ireland brand) this year also activates the online audience, offering virtual solutions for those who are either not comfortable or unable to attend physically but would like to tap into the famous Coca-Cola truck experience. Online audience can access a virtual truck tour.

Last year with England being in tiered system & restrictions, we naturally saw an increase in digital offerings to activate during the Christmas season, like Selfridge’s virtual video calls with Santa for example. Whilst some examples of this persevere, we’re very happy to see physical activations returning across the UK to delight audiences during the festive season. Brands are clearly listening to their consumers; they’re recognising their need to forge emotional connections in physical spaces, giving them Instagrammable moments in which to share socially, and all of this is setting an exciting precedent for experiential in 2022.